The Abbey’s program hasn’t excited me so much lately however my trip to see Christ Deliver Us on Monday night definitely renewed my confidence in our national theatre.

The play, set in 1950’s rural Ireland, focuses on a number of teenagers all grappling with their sexual awakening and general adolescence in a Catholic ridden environment. The lack of general sex education for these characters results in a number of humorous situations which generally cut through the more harrowing scenes involving tales of beatings, suicides, rape and death.

The main characters strikingly played by Aaron Monaghan, Laurence Kinlan and Aoife Duffin are all indicative of a generation lost in a swamp of over domineering Catholic ethos and are really the lost souls haunting the Murphy and Ryan reports. 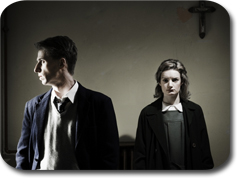 There are some small parts which irked me slightly, such as Fr. Seamus’ “fit” and cry that “the truth will out” which seemed to overstate the point to me, Vivie’s sophisticated English character bothered me a bit too and just seemed too stereotypical. However, the set is fantastic and there is wonderful momentum in the play which is kept moving by the furniture being shifted and rearranged as the young characters travel and figure out their way through the play.

I’ve never read Wedekind’s Spring Awakening, however this piece is definitely a very Irish play and of course is being staged by the Abbey to echo the current tensions between the Church and the people. I would like to see something maybe more challenging being staged on this topic, and I think that this play doesn’t tell us anything new or challenge the audience in any way. The box office assistant did tell me that there would be “upsetting” scenes in the play, and there are extremely harrowing scenes, however I think that to really address the abuse by the church, the priests’ characters should have been challenged more and maybe the focus fixed on them more so, rather than on the plight of the young people.

All this aside, Christ Deliver Us is a must see and is a striking piece of theatre which gives a voice to those who really are the lost generation of this country.