As You Are Now, So Once Were We Review

It could perhaps be the 16th of June 1904, and these actors are trying to find their part in Joyce’s seminal work – Ulysses, however this is rubbished by the inclusion of mobile phones (albeit large cardboard ones). Perhaps The Company‘s initial plan was to “pick up the most important and unread book in Irish history and follow James Joyce as he invents a whole city and its people.”, however they seem to have become sidetracked along the way and instead of delving into Ulysses, they’ve created their own. 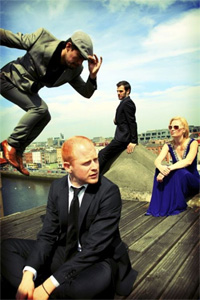 Far better than what the initial plan sounded like, this exploratory piece of theatre explores our everyday interpretation of all that happens around us, as well as our remembering or recreation of things past and imagination of things to come. The four actors become bloomalikes, wandering around Dublin city, sampling the food and getting into arguments about the burial of Paddy Dignam (four times over!).

The play itself is playful yet very self conscious in that it reflects upon itself and its characters as they reconstruct and imagine their day and how to recreate it on stage in the form of dozens of cardboard boxes. The actors themselves are outstanding for their perfect execution of complicated routines involving the boxes, along with beautiful storytelling and recounting of events.

The Company are definitely a talented group and I’ll be keeping my eyes out for them in the future. The play tonight was something very different, it was very “fringey” and experimental (not entirely dissimilar to the likes of Pan Pan) but at the same time, surprisingly well organised, executed and very polished. I would love to recommend others to go and see it but unfortunately tonight was the last night – boo 😦 Hopefully The Company will be back again soon with something different from what everyone else is doing – just like they did tonight.

Comments Off on As You Are Now, So Once Were We Review