Review: Love in the Title at The New Theatre

I’ve never been to the New Theatre before and I’ve also never seen a Hugh Leonard play before, so that’s two new things that I experienced last night.

Opening night at Room to Move‘s new production of Hugh Leonard’s ‘Love in the Title’ proved to be very entertaining. I’ll admit straightoff, more often than not I’m a little frustrated when I hear there’s going to be an interval. I’m not a massive fan of long plays, I usually find that a lot could have been edited out and I prefer theatre to be short and sweet. 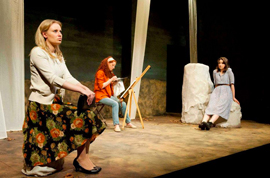 So I was a little worried when they announced there would be an interval half way through, but the two hours flew. A typical Irish play, ‘Love in the Title’ sees stories from three generations of women relayed through conversation in a strange, otherworld setting. Oddly, the eldest of the women is embodied in younger format and vice versa with roles reversed, thus reinforcing the unnatural setting in which the women find themselves.

This unnatural setting seems to force the women into discussing aspects of their lives, which they have buried deep beneath the everyday functions of a family. The play is a very entertaining series of stories and discussions with two of the characters experiencing important epiphanies; coming to new realisations about their life.

The acting is extremely good and what I especially love is the nice clean stage, leaving lots of room for the stories to unfurl. I was especially glad to see Tanya Wilson making an appearance, having been a fan of one of her previous play – The Company’s ‘As you are now so once were we’.  Melissa Nolan, while a wonderful actress, seemed a little too young for the character she played and I found it difficult to appreciate the age difference between her character and Wilson’s.

The play is beautifully written but I found, perhaps gets a little frustrating when Katie, the granddaughter of the group of women, doesn’t undergo the same epiphany the other characters do. She seems to know too much and not learn anything from the experience, while the other two characters – Cat and Triona come to new understandings of aspects of their lives, past and present.

A production to be recommended, ‘Love in the Title’ is a highly entertaining study of the misunderstandings between generations, the everlasting connection between family, and the female bond between these three characters.

Comments Off on Review: Love in the Title at The New Theatre