Review: The Horse Trading Diaries at the New Theatre

In my mind Che Guevara spent his days ambushing his opponents in fierce fights hidden away in the depths of the Congo – not cruising around a dingy hotel in a bathrobe. 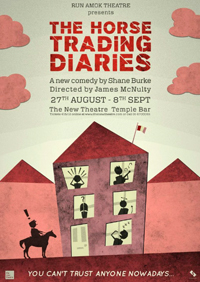 Perhaps this strange removal from reality is why Run Amok’s The Horse Trading Diaries is worth a watch.

Set in a fictional hotel in Limerick city, the only thing not fictional in this production is the fact that Guevara did in fact spend one night in the city in the 60s. It may be worth dispelling your interest in the Guevara storyline which proves less interesting than the well-spun cops and robbers tale that at times, merges with the type of dark, sarcastic humour that is evidently inspired by Fr. Ted.

Writing a historical character into a fictional story is a hard task and the result in this instance is a pretty bland version of the world’s most iconic revolutionary who plays second fiddle to more interesting and well developed fictional characters (in particular Una and Michael).

It is perhaps a little long but a good story lies behind the slap-stick humour and the Guevara tributes.

Plays at The New Theatre until September 8 – more information here.