That’s one way of describing Fishamble’s show ‘Silent’ by Pat Kinevane which currently plays at axis Ballymun. However look beyond the sing-sing Corkonian’s banter and humbling observations of the realism of homelessness and the crippling effects of depression ring true. 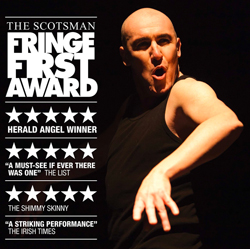 I’m a bit late in the game discovering Silent – which won both a Scotsman Fringe First and The Herald Angel at Edinburgh Fringe last year, but as evidenced by its many performances since its first staging; Silent is a joy of a production and offers the audience both plenty of chuckles as well as food for thought.

An entertaining and extremely physical performer; Kinevane makes his character Tino both friendly and menacing within a moment’s notice. Tino’s childhood recalls a narcissistic mother, a bullied brother and a community that shows little support or awareness of Tino’s plight. Thus we behold the fruits of this childhood as a ruined man stands tormented by his brother’s death and his estrangement from his only son – if only he’d taken care of himself and watched that mental health ad!

Careful lighting and razor sharp sound effects combine to give a very polished production with Kinevane performing effortlessly through the show. Moving swiftly between hilarious stories and impersonations to truly beautiful mime sequences and heart-breaking stories of how this tragic figure’s life spun out of his control; Silent is both a treat but also a show that will haunt you for a long time after the laughter has died down.

One response to “Review: Silent at axis Ballymun”