Review: The Secret Act of Murder

There’s something in the air at Smock Alley – whatever I go to see there, it never lets me down. Suffice it to say that a trip to see work in progress ‘The Secret Act of Murder’ was a treat during a dull, misty week in Dublin.

As you may have already gathered if you’ve read the interview with the director and writer of the show – Conor Madden and Stephen McDermott, The Secret Act of Murder is a blank verse tale of the curious death of Elizabethan playwright Christopher Marlowe. 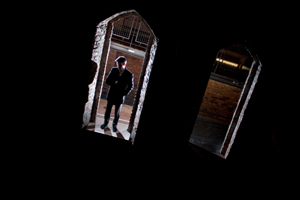 First off, Five Gallants’ program for the show is one of the best programs I’ve seen … and it was free! It’s really well designed and when you open it out there’s a funky timeline detailing all the events surrounding his death and some infographic type pics telling you more about Marlowe and the London he lived in.

This prepares you for the story that ensues – with Rob McDermott packing in an energetic and passionate performer as the sole narrator and explorer of Marlowe’s disturbing death. He presents an aggravated case against what has been previously accepted as the true story of how Marlowe’s death came about, and begins to question the value of this story.

With clever use of lighting to create an intense atmosphere along with multi-functioning props, McDermott figures his way through the story – reasoning with the audience and convincing them of how he sees the series of events panning out.

There is a lot to the story and I found the complicated series of events sometimes difficult to follow, but there’s no denying the infectious nature of the energy and passion that comes through from the performance teamed with the blank verse which lends a pulse and rhythm to the script.

I’ll be looking forward to seeing this when it next gets staged – in the meantime I think it’s time to go in search of a copy of Doctor Faustus.