Review: The Circus of Perseverance at Smock Alley

As far as cities go, Dublin manages to patch colourful characters against a very grey backdrop. The people of the city ebb and flow against one another in a constant struggle of perseverance against the unforgiving landscape of recession-ridden Dublin. Lives are intertwined. We push and pull one another in an attempt to keep our heads afloat although some give up and let their heads sink beneath the surface to escape the circus. 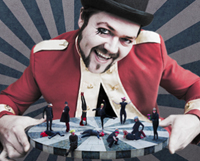 Gonzo Theatre returns to Dublin, bringing its ragtag tale of the lives of Dublin’s fair city to the Smock Alley stage, with all the madness, playfulness and brashness of good experimental theatre.

The ringleader choreographs a line up of talented and versatile actors into playing out the harsh yet sometimes uplifting characters of ordinary folk in a struggle to keep on top … of top of what? Life I suppose.

Lots impressed me about The Circus of Perseverance – the stories are simple, but carefully intwined to retain lots of momentum throughout this two-hour show. The performances are hugely demanding on the actors, but delivered well (especially from Rex Ryan and Patrick O’Donnell). And the music? Well, the music is just superb. Alan Darcy and Peter Denton strum and beat their way through the show with exhilarating electric guitar pieces and some atmospheric tin whistle playing to create a sensory experience that keeps drawing you in.

The stories told in The Circus have probably been told before in many other formats, but it doesn’t matter. How they’re told in this show is unlike any others and is guaranteed to draw you in with a few chuckles, some really captivating performances and the perfect musical accompaniments. Not to be missed.

Comments Off on Review: The Circus of Perseverance at Smock Alley