My first introduction to the wonders of theatre was in a stuffy classroom in fifth year, where we drudged our way through the awkward lines of Shakespeare’s Scottish play. Boredom drove me to the notes on the back of the curious smelling vintage copy I’d picked up in a secondhand store. 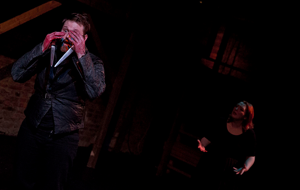 The notes highlighted the fact that Macbeth is not seen on stage murdering Duncan and so, the audience remains sympathetic to his guilt. Mind blown. I’d never before understood that a playwright could really have that much influence on the audience just by such a small trick like that. And so I was hooked on theatre and all its intricacies.

The exposed brick wall, dusky lighting and high, tunnel-like ceiling transports the audience to a bygone era. If you’re not a Shakespeare fan then the dialogue can be tough going in parts but Macbeth is such a great tale of deceit and ambition that it remains a timeless classic.

Plays at Smock Alley until January 25.