And here’s me thinking all the Russians were good for were those dinky dolls that fitted into each other. 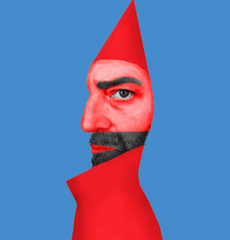 Well, don’t I feel stupid! Mr. Carmen is, by all accounts, one of the best piece of theatre I’ve seen in a while and is hands down, the biggest highlight of my trip to Edinburgh last weekend. Produced by the interestingly named Russian Engineering Theatre – AKHE; Mr. Carmen is a performance piece of theatre inspired by Mérimée’s novella which tells the tale of José whose ferocious love for a woman called Carmen forces him to commit terrible crimes, even murdering the woman he loves.

In this Russian piece, which comes in the format of a duel, the hero meets its alter ego and changes the text to replace Carmen’s name with José, thus rewriting Mérimée’s text. Each character uses a series of props and tricks to inscribe the names of José and Carmen across the stage. A line moving around the stage moves to a breath-taking, clockwork rhythm, and the characters both tell a dark, mysterious story of fatal love.

It’s not that I have an entire understanding of what when on during this hour-long show (I haven’t actually read Mérimée’s Carmen), what really impressed me were the boundaries that this company were able to push with this impressive piece.

If you’re in Edinburgh, this is the one piece of theatre I would say don’t miss. It plays until August 27 at 6pm each day – more info here.

Comments Off on Review: Mr Carmen at Assembly Roxy

Strobe lights and hissy teenagers are not exactly what you want shoved in your face the morning after a night out in Edinburgh, yet Lyric Hammersmith’s fresh, young cast managed somehow to charm and captivate my weary mind.

Bouncing on stage with all the teenage angst that makes me glad to be in my twenties; Morning’s sassy characters tell the tale of a young girl struggling to come to terms with life’s challenges including bereavement, boy trouble and lost friendships.

Music, strobes, clever use of movable lighting and the destructive use of props all combine to produce a feverish piece of theatre that at times is clunky but ultimately engaging and thrilling.

Don’t go if you don’t like rough and ready theatre but I’m in Edinburgh just under 24 hours and I’ve already worked out that if you’re a polished performance theatre fan you probably wouldn’t find yourself amidst this cacophony of experimental, creative and bustling festival.

Plays at Traverse Theatre until August 19 with a mixture of matinee and evening performances. Tickets £13-20 (concession rates available).

Comments Off on Review: Morning at Traverse Theatre